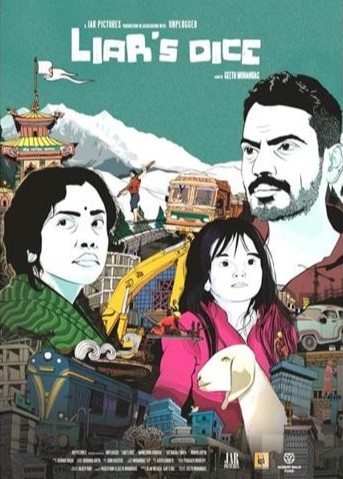 What a beautiful, sad, and heart-wrenching story. Liar’s Dice is a story of a woman who finds her kidnapped husband but what makes this film different is the Moments. Fewer Dialogues have opened the doors for actors to show their skills in the film and they have done their job well.
Let’s have a look at some minute things in the movie that made this film an outstanding film of Indian Cinema.

Director’s Realism for the movie has made audiences not get out from Director’s realm and instead feel what is shown to them. Director has used real background location sound throughout the movie except for 3-4 Scenes.
The sound of water, cars, trucks, People chanting in the Market, etc. Because of these Real Sounds, we have been able to connect to the scenes and get into the journey of the actor’s story.

The most beautiful thing in the movie was Real Locations. Every single scene has been shot in real locations which made the movie more authentic. Beautiful location that almost covers everything in the frame, from the characters to the places. There are approximately 2 Action Scenes in the movie. Both seem very authentic because of no close-up shots, only full-length shots, it was as real as CCTV footage.

I want to appreciate the Director for having fewer Close-up shots in this movie as compared to large angle shots. Large frame shots are the epitome of this beautiful movie.
Director has used the closeup shot when characters were traveling in Truck, because
these shots have described how a journey looks like when you travel in a congested vehicle.

No doubt Nawazuddin Siddiqui is a treat to watch in this film too as he tries to bring out the best of him, His Ruthless character who is so vulnerable at lies, that you can’t even fathom him as the moment you make your mind in favor of him he goes beyond your thoughts. His work on body language, when he first speaks to the leading lady, he keeps his shoulder down, starring eyes, not smiling face were meticulous justify. But Gettanjal Thappa as Kamla was a surprising package in the film, Her body language, expressions, and being a woman who is vulnerable to find her husband but at the same time she is also helpless was truly amazing.

She has proved her skills in the last scene where she vomits immediately the moment she gets to know about her husband that he has been killed by the same man she is been with from Shimla, which shows how perfectly she has imbibed that character with perfection. She is meant to grab a National Award for this role.
HATS OFF.

Nawaz is now having a very hectic line ups there are almost 8 lying in his lap and he is into reading some new scripts as well. According to the reports he is currently shooting for Heropanti 2. A s far as his net worth is concerned the let me tell you, he is charging a very good amount of rupees 5-6 crore/ Film.
His Total NetWorth is approximately $20Million.